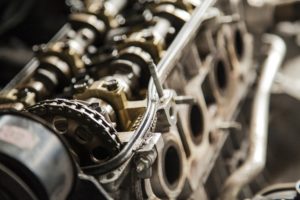 Polyurethane and rubber are two common elastomeric materials used in the manufacturing of products in many industrial sectors. The automotive industry, in particular, relies on each of these materials for many parts—gaskets, tires, belts, and hoses—for example. When it comes to a vehicle’s suspension, polyurethane vs. rubber bushings are often compared for their similar mechanical properties. Though indeed, the two materials are not opposites, they do differ in several ways. A rubber bushing’s properties are not the same as those made from polyurethane. As with any part, the choice relates to the mechanical properties required of the part.

To understand the differences and similarities between polyurethane and rubber, let’s take a closer look at the two:

There are many kinds of polyurethane. Polyurethanes are a family of plastics, or more specifically, elastomeric polymers, that includes rubber, which, since first invented in 1937, have been adapted to produce a broad spectrum of products. The material is exceptionally versatile, durable, flexible, adaptable, and resilient. Formed by a synthesis of poly-isocyanate and polyol, polyurethane holds mechanical properties that give it the strength of rigid plastic and the elasticity of rubber.

Polyurethane applications are near endless, and it is often used instead of wood, metal, paint, or cotton in many components and parts for consumer and industrial products. The foam in mattresses and upholstered furniture—couches, sofas, armchairs—is made of polyurethane, and so is soft foam found in toys and pillows. Insulation in walls and roofs, liquid coatings and paints, roller blade wheels, types of elastic fibers, components or parts used in automobiles, medical devices, footwear, adhesives, sealants, and flooring are all made with polyurethanes.

Like polyurethane, rubber is an elastomer. Because of their elastic properties, elastomers are often and aptly described as rubbery materials. Many may still conceive of most rubber products deriving from its natural form, that being from organic latex harvested from rubber trees, rather than the synthetic rubber made from petroleum byproducts. Though organic rubber is still harvested for use, the majority of rubber products manufactured today are made with synthetic rubber. In total, the latter accounts for approximately two-thirds of the world’s annual production.

Rubber is synonymous with tires, and it’s no wonder. Its elasticity, resilience, and toughness make rubber the basic component in the manufacturing of tires for cars, buses, trucks, aircraft, and bicycles. Most rubber production is generated for the automotive sector. Half of all rubber produced goes into the manufacture of tires for automobiles alone. A large percentage goes into mechanical parts and components like bushings, mountings, gaskets, hoses, and belts. Other rubber goods produced are for such consumer products as shoes, toys, clothing, and furniture.

Differences Between Polyurethane and Rubber

Both rubber and polyurethane are regarded for their elastic, flexible properties. Each material is commonly used in the manufacturing of parts and components in the automotive industry. The largest user of polyurethane reaction injection-molded (RIM) parts is the automotive industry. Because it is typically more durable than rubber, polyurethane is used in applications that require continual exposure to stress or constant stretching and offer a degree of flex, with plenty of strength. Such body parts as fenders, bumpers, and spoilers are made of polyurethane.

Rubber’s place in the automotive industry comes down to a single mechanical property—absorption. Rubber is more effective in absorbing vibrations than polyurethane. That’s why the material is used for making tires, but also for seals, gaskets, and bushings. In regards to the latter, when it comes to polyurethane vs. rubber bushings, rubber is more effective in dampening and absorbing road-noise, vibrations, and hardness than bushings made from polyurethane. Rubber components make for a quieter, smoother ride, and are generally the original equipment from the manufacturer. In applications that necessitate anti-vibration bushings, rubber is the choice material.

On the other hand, polyurethane gives the driver a more enhanced feel for the road, offering the driver the sensation that he or she is an extension of the vehicle itself. Rubber will wear out sooner, too, due to the constant stretching and stress on the part.

Still, rubber costs less than polyurethane, which may be another reason that manufacturers use rubber components when it comes to a vehicle’s suspension. The production of polyurethane is a more complex process. As a result, raw polyurethane costs more than natural or synthetic rubber.

Polyurethane and rubber have several differences and similarities. There are pros and cons of using each of these elastomeric materials. Ultimately, it will depend on the mechanical properties needed for the application.